Sure, I enjoyed the movie when I was growing up, but I was more of a Star Wars kid which made it kind of odd that I suddenly felt compelled to track down a copy of the original soundtrack from the movie.  At that time I couldn’t find the album in an MP3 format, so I ordered an old CD from someone on eBay.  It was crazy, but the only deal I found was from some dude over in England.  That’s right, England.  When the package made it across the ocean I cut open the envelope only to discover that I had paid for some British jackass to burn a copy onto a CD and scribble the title on it with a marker.

If you’re thinking about getting one for yourself they released a 40th Anniversary edition last year, and I just noticed it has the music from Smokey and the Bandit 2 on it. Huh. Maybe I should buy one? 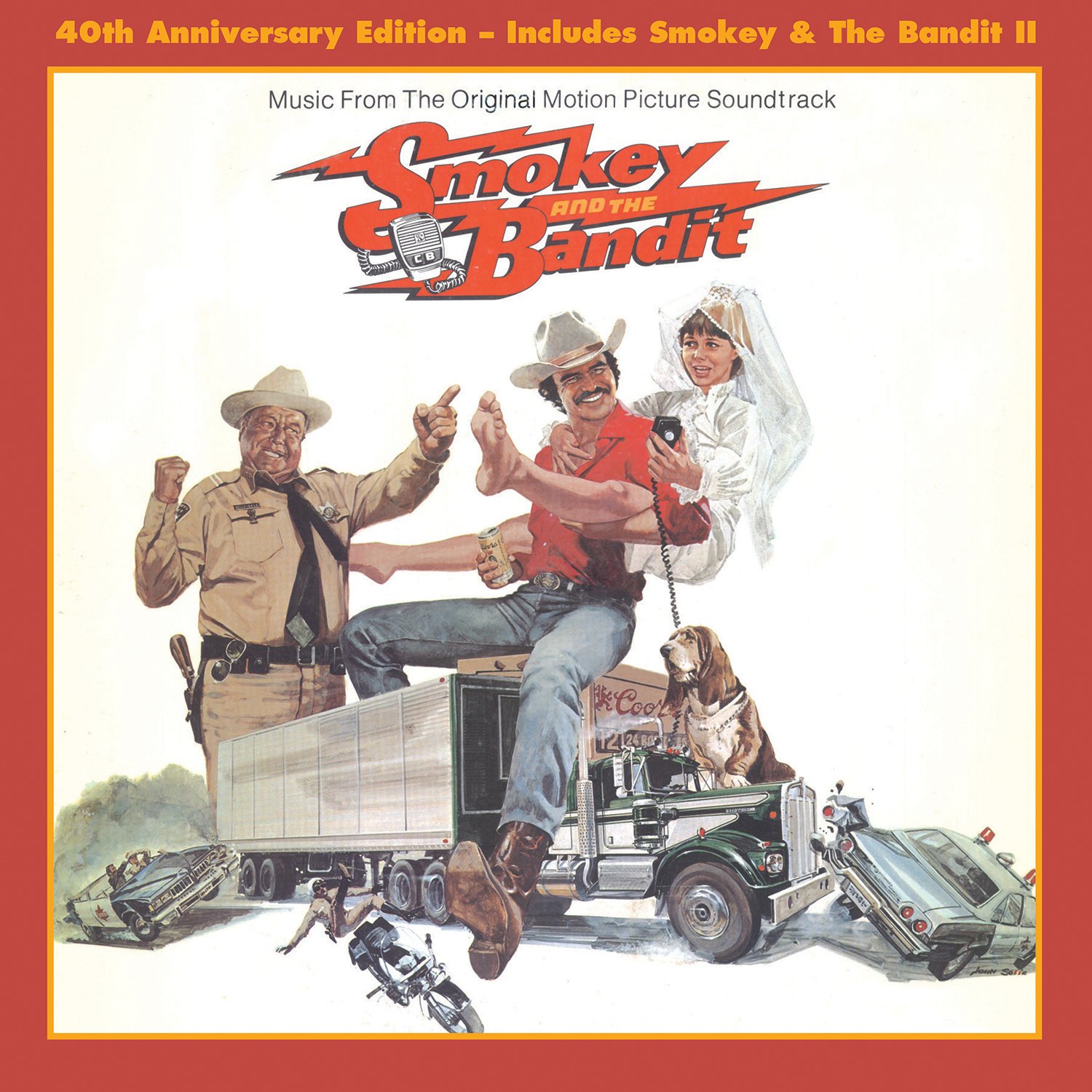 You’re in luck if you’re looking to get the album today as a digital download, as I found it on Amazon, – it’s one of those fun soundtracks that include clips of dialogue from the movie.

Back in 2010 when I was searching for a digital copy of the album I learned about a group (a club?) of Smokey and the Bandit fans who organize an annual road trip called “The Bandit Run” (thebanditrun.com) – (Bandit Run on Facebook)

Their most recent run was just back in June, and most annoyingly I just found out that I completely missed the Smokey and the Bandit 40th Anniversary Festival, which took place in Jonesboro last year!!

Why don’t you folks tell me these things??

The people who do the Bandit Run drive their Trans Ams in a convoy cross country together as a way of reminiscing about the movie that so many of us grew up loving – it’s honestly no different from my friends who wear Star Wars costumes at Dragon Con.

On the schedule for their 2010 run was a foray down to my side of Atlanta where many memorable parts of the film were filmed.  I read that the tour was open to the public, so that Saturday morning I hopped out of bed and hustled out to a parking lot a few miles away to find a group of Trans Ams parked around a loving recreation of the tractor trailer rig that Jerry Reed’s character “Snowman” drove in the film.

The gentleman who owned the big rig explained that he had recreated the iconic painting (of a bandit holding up a stagecoach) and had it output as a digital print, which he applied to the side of what looked to be a vintage trailer.  Having worked on the movie Black Dog I didn’t recall seeing any trailers like this one. Speaking of Dragon Con, one of the guys even had a pretty good Sheriff Buford T. Justice costume going on!!!! My inner fanboy was in overdrive, which was funny, since I had worked alongside big name actors when I was working set all those years as assistant propmaster on feature films.  Apparently, there are some things you will always geek out about.

Next, our tour guide outlined our route. Then we got in our cars. Before heading out that morning I had dug out a CB radio that I’d used when helping my friends Joe and Terri move across the country to LA more than a decade before.

This was a blast.

Watching all those Trans Ams pull out and seeing that rig drive away to follow them was absolutely magical.  Here’s some video I shot with my old Casio point and shoot.

We hit a number of spots around the area, from an old car wash… …to old downtown Jonesboro where they proceeded to reenact the famous scene where Burt Reynolds and Jerry Reed stop to load up the Coors beer they’d been paid to bring back to Georgia by Big Enos Burdette.  Check out my video!

We stopped by the lake where Bandit and Frog have one of their talks and I took that opportunity to do a selfie video (with my camera, since it was 2010 and selfie videos with your phone wasn’t really a thing yet).  I really country’d it up for the camera on this one.

Take a look inside the vintage replica of the big rig Snowman was driving (it’s really Bandit’s rig, right?) Driving down the highway with Bandit “in the cradle” between me and Snowman was a childhood dream come true.

The last stop on the route was a storage business along Flint River Road. We filled the lanes between sheds with our cars and headed off into the woods behind the place. What was so special about those woods? It’s the place where Bandit jumped his Trans Am across the Flint River (aka Mulberry Creek in the movie).  They apparently recreated that jump at the Atlanta Motor Speedway during the festival last year because the real location was too grown up with weeds.

To that I can attest. One of the coolest, most hysterically generic collectible things I now possess is a bit of the asphalt from the bridge seen in the original movie. The printed provenance sheet included in the archival ziplock sandwich bag along with the asphalt reads:

The name of the storage business has changed since then.

A lot of my friends worked with Burt on various films shot here in Georgia through the years.  To JL’s wife, Mrs. Cindy Parker, I hope you enjoyed this story!  I am glad that I decided to spend a few hours with these fans back in 2010, because it provided me with a bit of a connection with the famous American icon, Georgia’s early film industry, and my own backyard.

Good numbers all the way, Bandit.

Heaven bound and down.