Old magazines are awesome. Frozen snapshots of singular points in history, within the context of the age in which they were published. Take for example this 1966 issue of the magazine Science & Mechanics (which would later become ‘Creative Computers’, ultimately absorbed by ‘Creative Computing’, which ceased publication the year I graduated high school). This issue provides a glimpse of the future of birth control using a battery-powered radio transmitter and a strongly argued case by Brigadier General J. H. Rothschild for the use of gas warfare in the ongoing Vietnam War. 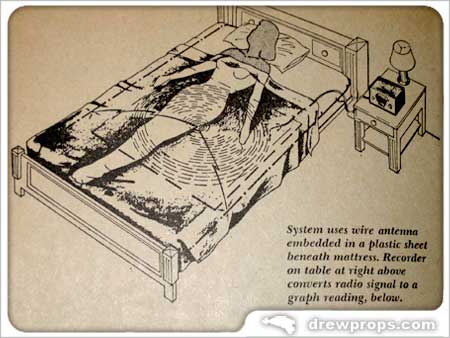 Turns out that the birth control article is centered on the research into the relationship between Basal body temperature and ovulation. The device shown in the article is a transmitter intended to be placed in a woman’s “vaginal vault” (sexy, no?) and used to track her cycle in order to determine the brief period of monthly fertility via an antenna placed underneath her bed.

So, it’s not really some sort of heinous fetus-zapper. It’s actually the precursor to modern tools that fertility clinics use to zero in on candidate periods of best opportunity for couple having difficulty in achieving conception. Alternately, and more intriguingly, it could be used as a monitor for women who want to avoid having sex during the times they’re most likely to conceive. Other means of contraceptives aren’t discussed in the article, so there’s no in-depth discussion as to how this might be combined with (or used as a means to avoid) condoms or spermicidal gels.

Forty years down the road from the publication of this magazine I wonder if smaller, more technologically advanced versions of this device might be used in third world countries experiencing population booms. Would there be a way to create small, safe thermometers that could record basal temperatures for days, perhaps weeks, at a time. This data could be transmitted wirelessly, via RFID, to a computer at a central clinic, where a case file for each participant could be established, allowing the women to know the range of days in which they should abstain from sexual activity to avoid pregnancy.

I see no reason why a miniaturized “travel” version of this couldn’t be sold over the counter in a means very much like the iPod Nano running system sold by Nike and Apple that allows runners to evaluate their running scores on the computer. Imagine being able to sit down with your computer and plot out the best times for sex using your own body as your guide, like scheduling orders from NetFlix.

Call it the iRhythm, you’ll sell a million of them if you can get them to play music too.

Steve Jobs, don’t think you won’t owe me royalties if you decide to make these. I know people, see?