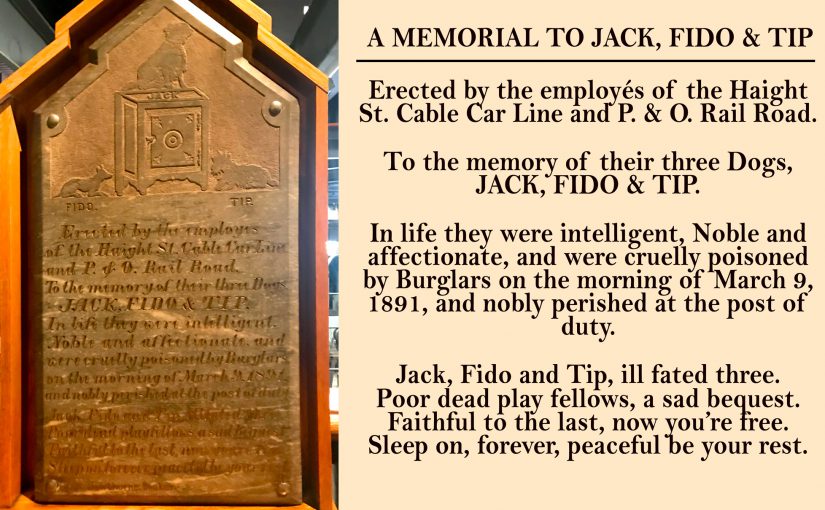 One of the most unusual items in the museum is a marker commemorating the killing of three guard dogs: Jack, Fido, and Tip. Get a closer look via this brief video I grabbed while I was there:

The text on the plaque reads as follows:

Erected by the employés of the Haight St. Cable Car Line and P. & O. Rail Road.

To the memory of their three Dogs, JACK, FIDO & TIP.

In life they were intelligent, Noble and affectionate, and were cruelly poisoned by Burglars on the morning of March 9, 1891, and nobly perished at the post of duty.

Discovery of a Lost Plaque

In 1931 Time Magazine recorded the discovery of a marble plaque fitting the description of the one in the Cable Car Museum. Is it the same one? Probably? The full text of the Times story is behind a paywall but here’s the preview text as reported on Monday, March 16, 1931:

Housewreckers dissecting a brick wall in San Francisco lately found riveted to it a large memorial plaque of marble. Carved thereon were three marble dogs, two crouched beside, one perched on top of an old time safe. Below them was graven this testimonial: “. . . To the memory of three Dogs, JACK, FIDO, & TIP. In life they were intelligent, noble, and affectionate, and were cruelly poisoned by Burglars, and nobly perished at the post of duty.

Out of curiosity I began googling the names of the three dogs. Here’s what I found…

I found older information about these poor dogs in the “Bazaar Exchange and Mart, and Journal of the Household, Volume 48”, dated Monday, April 24, 1893.

The document is available from Google Books via this link.

On page 722 is an account of various dog-related activities, including the following, which includes a slightly different rendition of the text on the plaque shown above, as well as a bit of other information about other railroad dogs I did not see documented at the Cable Car Museum.  Please note that the spelling of the word “employees” has changed in the hundred some odd years since this was engraved; I recognize the antiquarian spelling because it is repeated in the charter for IATSE, an entertainment union to which I belong. “It is not often that a dog’s memory is perpetuated in marble and his grave kept green. Such a lot falls only to a hero in the canine race, and although there may be many such heroes in life they are seldom thought of after they have gone. Beside the roundhouse of the Park and Ocean Railroad, San Francisco, lie five of these heroes, and over their well-kept graves are marble slabs telling of their virtues. At the top of one slab, we are told in an American paper, is a representation of three guards guarding a safe, and under it these words are engraved in gilt letters:

Erected by the employés of the Haight St. Cable-Car Line and Park & Ocean Railroad to the memory of their three Dogs, Jack, Fido, and Tip. In life they were intelligent, noble, and affectionate. They were cruelly poisoned by Burglars on the morning of March 9, 1891, and nobly perished at the post of duty,

On a small slab next to the big one is an empty dog-kennel cut in the marble, and under it are the words : “Jack. Gone, but not forgotten.” The third slab calls to memory of one of the best-known railroad dogs in California, Nig, a Black Spaniel, who was run over by a car and killed. The inscription on the oval slab erected to perpetuate his memory reads: “In memory of our old old dog, Nig, accidentally killed, April 21, 1894. Intelligent and brave.”

A scheme is on foot for holding a dog show in Redruth. There are plenty of fanciers in the district, and the matter is being taken up in real earnest.

I am just one of many visitors who have walked away from the cable car barn saddened by this small homage to three dogs who died so cruelly. Not being a San Franciscan I am unaware of the city’s history and don’t know if there has ever been wider recognition of these dogs in ‘modern’ times, but Jack, Fido & Tip could become a great opportunity for a dog-centric business or charity.

If you know more about these pups or if you decide to revive their names in some way please let me know!