First you’ll need to find out if there are any movies filming in your town, then you’ll need to call them to find out about casting calls for extras. Often there will be a separate telephone number for extras casting, and there will only be a recording on the other end of the phone. DON’T try to call the main number back and pester the person answering the phone because the word will spread that you’re a nuisance and you’ll never work in this town again.

Not that you couldn’t find the answers anywhere else on the internet, but here’s a quick rundown:
DP = Director of Photography
Grip = they build camera rigs, create shadows and drink beer
Gaffer = Key Electric or Chief Lighting Technician
Best Boy = 1st Assistant to department head (grip or electric)
Dolly Grip = the grip who operates the camera dolly (not easy)
Key Grip = the Head of the Grip Department
Focus Puller = the person who focuses the camera during a shot
Loader = the person who loads (and unloads) film magazines
2nd 2nd = the assistant director usually in charge of basecamp

These answers have been simplified, every one of these jobs has many aspects that cannot be encapsulated and the interaction between departments adds yet another layer of depth that is constantly adaptive dependent upon the people filling the jobs.

I almost missed this article in the November 2002 issue of ARCHIT magazine. It mentions Hedjuk and the Suicide Boxes but manages to leave out Georgia Tech, Professor Jim Williamson or any indication of who built these things. Ah, Architectural Fame, just like good old whats-his-name who engineered the pyramids….

The “hottest” Hot Rat, Kelly Leavell, writes in to say that she is the proud Mom of a 4 year-old girl and a 6 year-old boy. Kelly still lives in the Atlanta area.

Matt Greer says that Michael “Arkansas” Pouncey has given up the glamorous architecture lifestyle for good old-fashioned farming in Hughes, Arkansas. I guess he wasn’t kidding about that whole nickname thing… go figure.

Also of note, one ‘Christo Harris’ is listed as the editor of “The Southern Movie Hound”, which features the dog and cat team of Dooley and Butter who will introduce weekly movies on Turner South.

In late May 2002 I was contacted by Tripp Norton, one of the producers of the independent film “The Greenskeeper” to create a theatrical poster for the movie. Working from a basic composition requested by Tripp, I set out to create a movie poster that would provide an engaging color palette and help to convey the essence of the film to the casual viewer in less than ten seconds. The bad part was that I received all of the photographs for assembling the poster less than six days before the movie was set to premiere, so time was already against me. All told, I spent 42 hours working on this project. The final 300dpi Photoshop file came out at a whopping 480MB, and when opened it has at least 30 different layers which makes the file a beast to work inside.
END_OF_DOCUMENT_TOKEN_TO_BE_REPLACED This is an article about me that appeared in the Georgia Tech Alumni magazine a year or so after I graduated from the School of Architecture. I look like I’m 12 in the picture. And a member of the band “A Flock of Dipwads”. I don’t know where my printed copy is and Georgia Tech’s online version doesn’t give a credit to the original author. So, this is an unauthorized reprint about myself.
END_OF_DOCUMENT_TOKEN_TO_BE_REPLACED 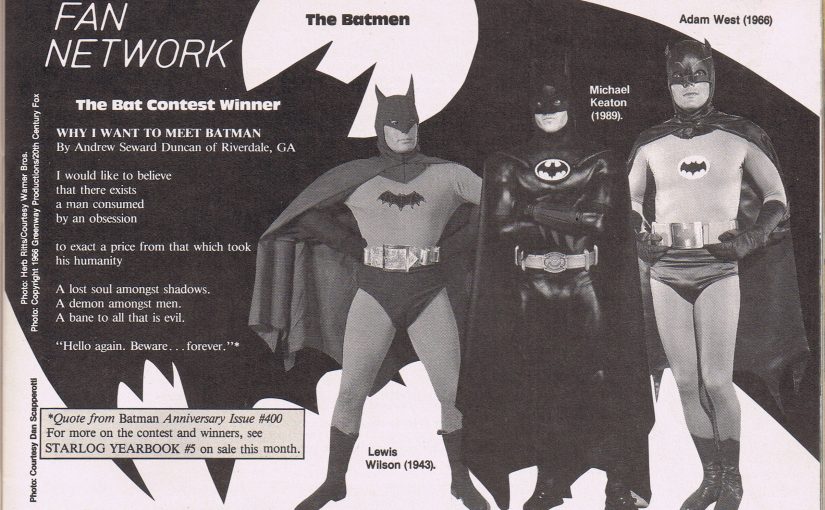 This is the time I won the Batman contest. In late September of 1988 I was at the local comic book store, Titan Games & Comics, and was looking at some things that were tacked to the bulletin board near the front register. Some of the guys from the store had gone to WorldCon in New Orleans that year and one of the little things they’d brought back with them was a contest form that issued the challenge: “Tell Us Why You Want To Meet Batman in 50 Words Or Less And Win An All-Expense Paid Trip to Be In The Movie!”.

Naturally I disregarded that brochure, gathered up my comic books, paid for them and drove home. When I went into the house I saw that my Dad was watching a sales video. Totally disinterested, I grabbed something to eat and started to head upstairs to work on a model… but something the guy on the TV was saying caught my attention.

He said that a recent poll had shown that 95% of all Americans didn’t think that they could win at anything. He went on to explain the ramifications of that poll for salesmen, but all I could think about was that contest form back at Titans. I went upstairs and called the store and talked to the Manager, Chuck Sheffey, who patiently read me the contest rules over the telephone.

After I understood the rules I immediately started writing, and in about an hour I’d written something that felt right. It didn’t seem right to send in my entry on a sheet of paper, so I got out some markers and some glue and proceeded to make an aged sheet of paper with my entry written on it. I then slipped into a paper Batarang (Batman’s bat-shaped boomerang). I think it took me about three hours from start to finish.

END_OF_DOCUMENT_TOKEN_TO_BE_REPLACED She wasn’t your usual cat, this one. She stood five feet tall at the shoulder and her coat was jet black streaked with fluorescent red. Her claws were long elegant blades and she had mysterious green catseyes, but it was her black leather cape and knee-high go-go boots that were a definite giveaway that this wasn’t your everyday feline.
END_OF_DOCUMENT_TOKEN_TO_BE_REPLACED

Well, this year I failed miserably at organizing my friends to go to the RenFest. The ones that I did get to go had prior commitments, and had to leave early. So none of them witnessed the drunken splendor and bawdy majesty of the pub sing. Most of the people I called said “oh yeah, that sounds fun, count me in” then proceed to totally not show up. I’m beginning to suspect these people don’t eat the fruitcakes I give them at Christmas…..hmmmm.
END_OF_DOCUMENT_TOKEN_TO_BE_REPLACED

I recently learned that a project that I worked on with my friend Julie Sanford back in 1994 has finally been built by the property owner, up in the northwest corner of Georgia near Lookout Mountain. As soon as I had the time I grabbed my parents and drove up and to see it in person.  It’s a residence inn for hang glider pilots, which is the reason that the rooflets look like END_OF_DOCUMENT_TOKEN_TO_BE_REPLACED